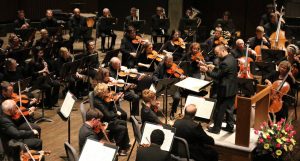 Maestro Lawrence Loh of Symphoria stopped into the Classic FM studios to chat with mid-day host Diane Jones. Find out about the concerts coming up for the rest of this season, and about the exciting 2017-18 season for Symphoria. Maestro Loh also tells us a bit about just how a season of music is planned, and the challenges of performing in unusual spaces,