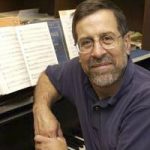 Barry Torres stopped by the Classic FM studios to chat with Diane Jones about the upcoming Schola Cantorum concert.  We also talked about the joys and challenges of putting together an early music concert, and some of the differences in style from the classical works we hear so often in a concert hall.  You’ll also hear a bit of music from last year’s Christmas concert.  Take a listen!