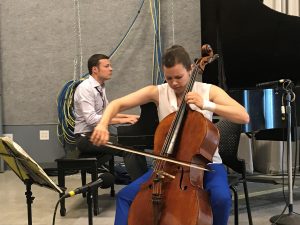 The Skaneateles Festival is celebrating its 40th Season of “World Class Music by the Lake” with a wide array of music and guest artists.  Current festival Artistic Directors Julia Bruskin and Aaron Wunsch joined mid-day host Diane Jones in the WCNY studios to talk about the season, and some of the special events in store, including a Backstage Pass talk from current and former festival directors titled “How to plan a festival in 400 easy steps.”  Also in store this year, a commissioned work by Pierre Jalbert, performances from Hilary Hahn (who first performed at the festival at 12 years old), Wynton Marsalis and the Jazz at Lincoln Center Orchestra, Bela Fleck and Abigail Washburn, and the festival finale with David Zinman conducting the Festival Orchestra.

Aaron & Julia also performed music by Bach and Mendelssohn live in the studios!.

You can see details for the entire Skaneateles Festival right here.