Lawmaker postpones fundraiser scheduled a week before budget due

Assemblymember Maritza Davila, a Brooklyn Democrat, is postponing a political fundraiser scheduled for March 24 after being asked by The Capitol Pressroom about the propriety of soliciting campaign contributions a week before the state budget is due.

“I do understand how this can look … so it’s going to be postponed,” Davila said Wednesday. “I don’t like the perception, because that’s not the person that I am.”

“I really wasn’t even thinking about the last week of budget,” she said.

Davila said this annual fundraiser traditionally occurs earlier in the year, but was delayed until late March because of health problems she was dealing with. The zoom event was scheduled to include Assembly Speaker Carl Heastie.

March fundraisers are not rare in New York, but they’ve gotten more scrutiny since 2019, when Gov. Andrew Cuomo came under fire from progressive lawmakers for hosting a big-ticket fundraiser two weeks before the budget was due. The timing of the solicitation was seen as particularly egregious because Budget Director Robert Mujica was in attendance at the event.

Editor’s Note: If readers know of additional fundraisers scheduled for this month, let The Capitol Pressroom know about them! Shoot an email to David.Lombardo@wcny.org 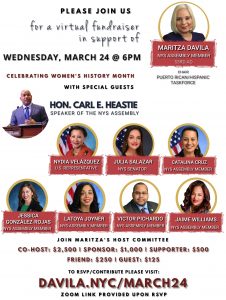 Flyer for a fundraiser for Assemblymember Maritza Davila, a Brooklyn Democrat.