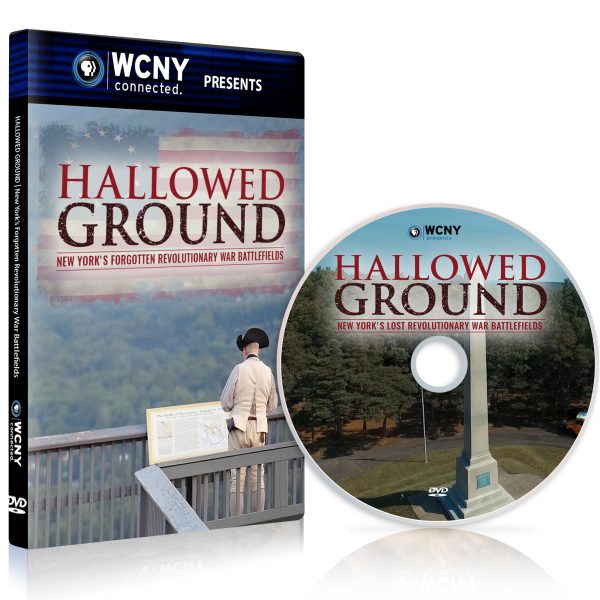 Hallowed Ground: New York’s Forgotten Revolutionary War Battlefields
For the past 15 months, WCNY production crews have travelled to northern and southwestern New York communities to explore four Revolutionary War battlefields, all sites of pivotal battles and all on the list of the National Park Service’s endangered battlefields. Along the way, WCNY has interviewed historians and tribal leaders, archaeologists and preservationists, battlefield friends and interested citizens, to uncover each battlefield’s past and present story. In addition WCNY has hosted community engagement events in the communities where the battlefields reside bringing such noted speakers as Dr. Andrew O’Shaughnessy, Vice President of Monticello and author of The Men Who Lost America: British Leadership, the American Revolution, and the Fate of the Empire and military history Glenn Williams, author of the award-winning Year of the Hangman: George Washington’s Campaign against the Iroquois, who helped broaden knowledge of each battlefield’s significance.

Lindsey Morrison of the Civil War Trust also was a guest speaker. The Civil War Trust, in 2014, expanded its mission to foster the preservation and interpretation of Civil War battlefields to include battlefields from the Revolutionary War and the War of 1812 via its Campaign 1776. Congress enacted legislation to expand funding to preserve endangered American battlefields. According to a 2007 survey, of 243 principal Revolutionary War and War of 1812 battlefield sites identified by the National Park Service, 141 are either lost or unable to be preserved in a meaningful way. 100 other surviving battlefields retain only about 37% of their original historic landscape, with 82 of then partially owned and protected and 18 lacking any sort of protection.

The result of WCNY’s work is a new hour-long documentary, Hallowed Ground: New York’s Forgotten Revolutionary War Battlefields, which will debut on WCNY at 8:00 p.m. on June 26. The documentary was made possible, in part, by a grant from the National Park Service’s American Battlefield Protection Program. Two battlefields near Elmira, NY – Chemung and Newtown – were part of the Sullivan-Clinton campaign’s goal to eliminate the threat of Iroquois warriors fighting alongside the British while the battles in northern New York, at Fort Ann and Walloomsac (the battlefield is actually named for Bennington, VT about 10 miles away) were essential to delaying British troops from a timely arrival at Saratoga, which loomed large in that American victory, which became the turning point for the war.