Join WCNY in honoring our current and former members of the United States Armed Forces!

In celebration of our veterans, we have some great TV, radio, and educational programming and resources to share with you! 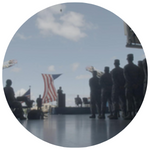 USO – For the Troops
For 75 years, abroad and on the homefront, the USO (United Service Organizations) has been by the sides of American service members at every point in their military journey. “USO – For the Troops” takes viewers behind the scenes and inside the organization, providing an eye-opening glimpse into how the USO has kept service personnel connected to country, home, and family.
Watch Friday, Nov. 11 at 9 p.m. on WCNY-TV 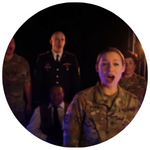 The Falling and the Rising
Join us for an operatic story of service and sacrifice as it follows a soldier through her unconscious dreamscape of encounters with fellow service members. Based on real-life interviews with wounded soldiers, this operatic soldier’s odyssey was created in hopes of capturing the indomitable spirit of our U.S. military veterans.
Watch Friday, Nov. 11 at 10 p.m. on WCNY-TV 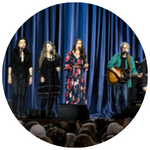 Songwriting with Soldiers
Celebrate a unique collaborative of professional artists working with veterans and families to tell stories of war and the return home through lyrics and song. This concert special celebrates music with the power to heal and bring diverse people together.
Watch Friday, Nov. 11 at 11:30 p.m. on WCNY-TV 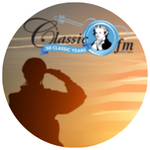 Veterans Day Special
Veterans Day was born out of a horrific conflict, but it is about much more than war. Classic FM’s Veterans Day Special pays musical tribute to all American veterans who served their country honorably during war or peacetime. It salutes not just the people, but the country they love. Military music, musical landscapes, plus words and music about what America is about.
Listen on Friday, Nov. 11 at 11 a.m. and at 6 p.m. for a musical tribute to our veterans and their country.

“American Veteran” is a four-part documentary series tracing the veteran experience across the arc of American history and exploring the present-day divide between civilian and veteran communities. From the citizen-soldiers returning from the Revolution to today’s warrior class, it is a deeply moving story, illuminating the veteran experience and drawing civilian viewers into an unfamiliar culture.

Get inspired by the story of an organization that dedicates an incredible bevy of resources to honoring Veterans from across the Central New York region. They embark on a journey each year that starts far before the Honor Flight takes place and touches the hearts and minds of Veterans and families alike as they leave no stone unturned, orchestrating a day filled with meaning all involved will never forget.

Four Native American Vietnam War veterans reflect on the agony of war and how their communities helped them carry their warrior legacy proudly. A lifetime later, these soldiers begin to tell their stories. Funding provided by Vision Maker Media and The Mark and Mary Davis Foundation.

Veteran Children is a documentary film project that illuminates the remarkable strengths, challenges, and perspectives of America’s military children. The film provides a unique lens as families and children tell us their own stories in their own words.

Since the Iraq War began, soldier arrests in the city of Colorado Springs have tripled. FRONTLINE tells the dark tale of the men of 3rd Platoon, Charlie Company, 1st battalion of the 506th infantry, and how the war followed them home. It is a story of heroism, grief, vicious combat, depression, drugs, alcohol and brutal murder; an investigation into the Army’s mental health services; and a powerful portrait of what multiple tours and post-traumatic stress are doing to a generation of young American soldiers.

Lesson Plan: Veterans Day and the Meaning of Sacrifice