That’s the vision of state Sen. Kevin Thomas, a Long Island Democrat, who joined The Capitol Pressroom on Wednesday to talk about new legislation that would impose a state sales tax on digital advertising. Revenues would then be directed to a fund administered by the Higher Education Services Corporation that would offer zero interest refinancing of student loans.

He contended that digital advertising is exempt from existing state tax law, which focuses on “tangible advertising services.” “What my bill does is a sales tax between a company and the advertising agency,” Thomas said. 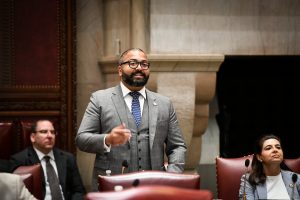 If the advertising firm and the client weren’t based in New York the proposed sales tax wouldn’t apply, but Thomas believes that revenue could still be collected by the state’s “use tax.”

Legislation in a similar vein made it through the Maryland state legislature, but that measure taxes a digital advertiser’s annual gross revenues derived from digital advertisements. Opponents of the Maryland proposal, which has been introduced in a very similar fashion in New York by state Sen. Mike Gianaris, contend this method of taxation runs afoul of the U.S. Constitution and federal statutes.

Thomas believes the construction of his bill would enable it to withstand potential legal scrutiny.