Dissension on SUNY board over chancellor selection process

The anointing of Gov. Andrew Cuomo’s close ally as the next head of New York’s public colleges and universities isn’t sitting well with the state’s faculty.

A resolution crafted by the Faculty Council of Community Colleges and University Faculty Senate, which is not expected to be voted on during Friday’s meeting naming Jim Malatras the next chancellor of the SUNY system, calls for a vote of no confidence in the politically appointed members of the SUNY Board of Trustees. 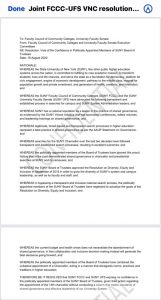 Proposed resolution calling for a vote of “no confidence” in the politically appointed members of the SUNY board.

“The politically appointed members of the Board of Trustees have condoned the unilateral appointment of a chancellor, acting in a manner that disregards norms, practices and traditions in higher education,” reads the resolution.

“We are making a statement that this has been contra to all good rules of shared governance, or good governance, in academic institutions,” University Faculty Senate President Gwen Kay said in a statement.

Kristina Johnson announced in early June she would leave the post of SUNY chancellor, setting off immediate speculation (including from yours truly) that Malatras would be rammed into the post, despite not having the credentials of past chancellors. In less than a week, the subtext became text, when the Times Union quoted another close ally of Cuomo making the case that Malatras should assume the job.

“I think it will be short-sighted and a waste of time to do a nationwide search when there are many issues that need to be resolved now to move SUNY forward,” Larry Schwartz told the paper.

The resolution argues that the health and budget crises facing higher education, and the rest of the state, don’t justify “the abandonment of shared governance.”