NBA stars get Sportscaster U broadcasting training in WCNY studios 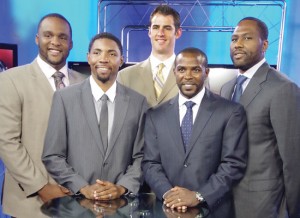 NBA stars Elton Brand, Glen Davis, Mike James, Roger Mason Jr., and Jason Smith learned how to transition their careers on the court to one behind cameras and microphones at WCNY’s new Broadcast and Education Center in June.

Sportscaster U, a program developed in partnership with the union representing the National Basketball Association players and Syracuse University’s S.I. Newhouse School of Public Communications, offered a half-dozen veteran NBA players the opportunity to work as game and studio analysts at WCNY’s 57,000-square-foot facility. Newhouse usually hosts the program, but needed an alternate location due to construction at the university’s broadcast facilities.

“Opening our facilities to partners like the NBA and Syracuse University, and to a tremendous program developed by one of our region’s universities, is exactly how we envisioned the community using the new building,” said Robert J. Daino, WCNY’s president and CEO.

Matt Park, the voice of the Orange at Syracuse University and director and instructor of the program, said Sportscaster U’s expectation is to give the players a premium learning experience.

“We don’t promise in three days that we will make them hall-of-fame broadcasters, but we do promise that they’ll never watch TV or listen to the radio the same way and, at the end of three days, they’ll know whether they care to pursue this further,” said Park.

“If any athlete wants to go into broadcast, this is something they need to do. You need to be willing to work for it,” said Mike James, of the Dallas Mavericks.

Throughout the three-day training, ESPN broadcasters like Steve Infanti, sports director at NewsChannel 9 in Syracuse, and Gerry Matalon, ESPN senior coordinating producer of on-air talent and development, helped with the training. They led players through an icebreaker radio session that introduced them to performing in front of a microphone.

Sportscaster U students also tried their hand at broadcasting a real game; in their case, a recording of Game 5 of the NBA Eastern conference final.

“One of the upsides of doing the training at the new WCNY building is the technology is all brand new,” Park said. “Also, the studios, control rooms and conference rooms are conveniently located near each other.”

While there have been many successful alumni from the program, Shaquille O’Neal is the most notable.