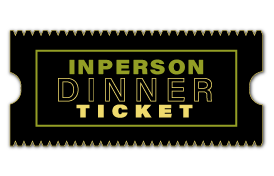 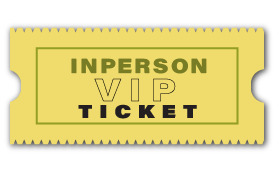 VIP ticket holders are invited to attend a meet and greet/cooking demo event at WCNY TV Studios at 4 p.m., prior to the three-course dinner at the Marriott. The VIP event features a meet and greet, and photo op with Lidia, in-studio cooking demo, and an autographed copy of Chef Lidia’s “Lidia’s Celebrate like an Italian.” Chef Julia Collin Davison from America’s Test Kitchen will emcee the cooking demo event and the three-course dinner. 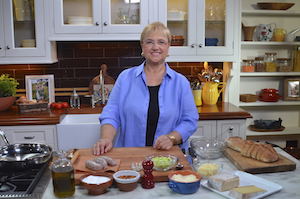 Lidia is an Emmy award winning public television host, a best‐selling cookbook author with a dozen books published to date, a successful restaurateur, and owner of a flourishing food and entertainment business Most importantly, Lidia has accomplished all of this by marrying her two passions in life her family and food, to create multiple culinary endeavors alongside her two children, Joseph and Tanya.

Lidia is the owner/co-owner of three acclaimed New York City restaurants Felidia Becco and Del Posto Along with her daughter Tanya, she owns Lidia’s Kansas City, as well as Felidia She is also a partner in Eataly NYC, Chicago, Boston, Los Angeles, Las Vegas, Sao Paolo, Brazil and Toronto, Canada Together with Tanya and son in law Corrado, Lidia also has developed a line of artisanal
pastas and all-natural sauces, LIDIA’S, which are sold at fine food stores nationwide.

Lidia is a member of Les Dames D’Escoffier and founding member of Women Chefs and Restaurateurs, two non-profit organizations of women leaders in the food and hospitality industries She is also a champion for the United Nations Association of the United States of America’s Adopt A Future program, in support of refugee education.

Among the numerous awards and accolades Lidia has earned are seven James Beard Awards (Outstanding Chef, Television Food Show, Best Chefs in America, Who’s Who of Food Beverage in America, Specials 2016 Special 2017 and 2018 and two Emmy Awards for Outstanding Culinary Host 2013 and 2018. 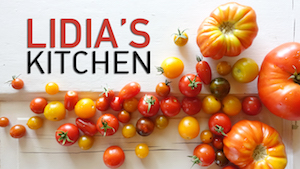 Prior to Taste of Fame 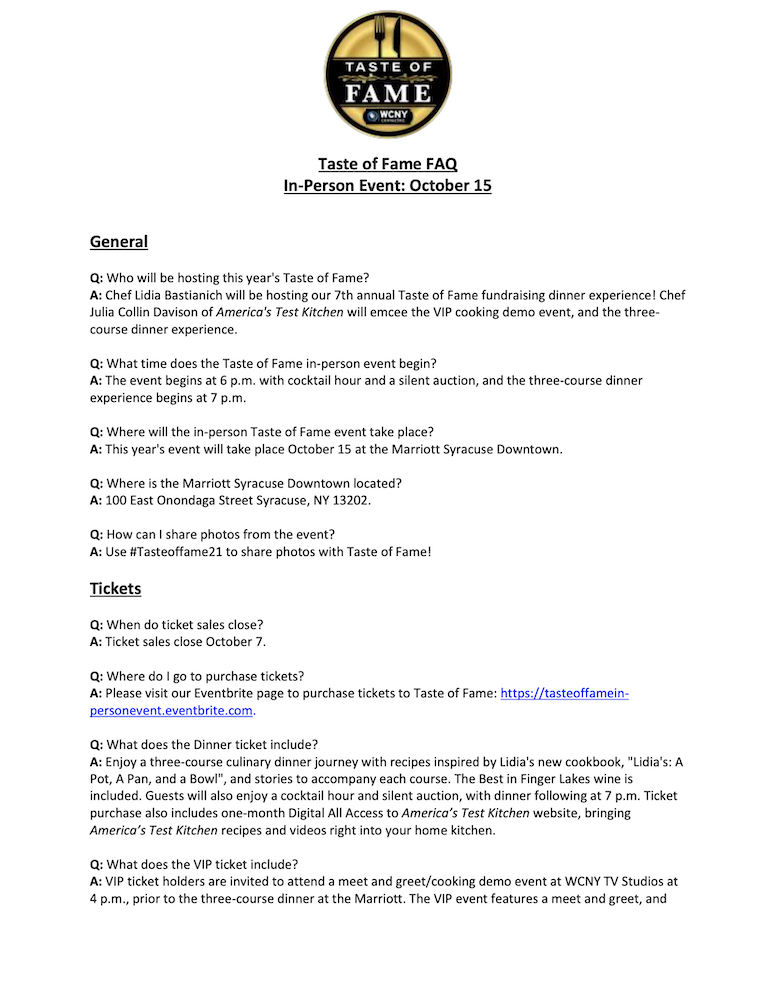 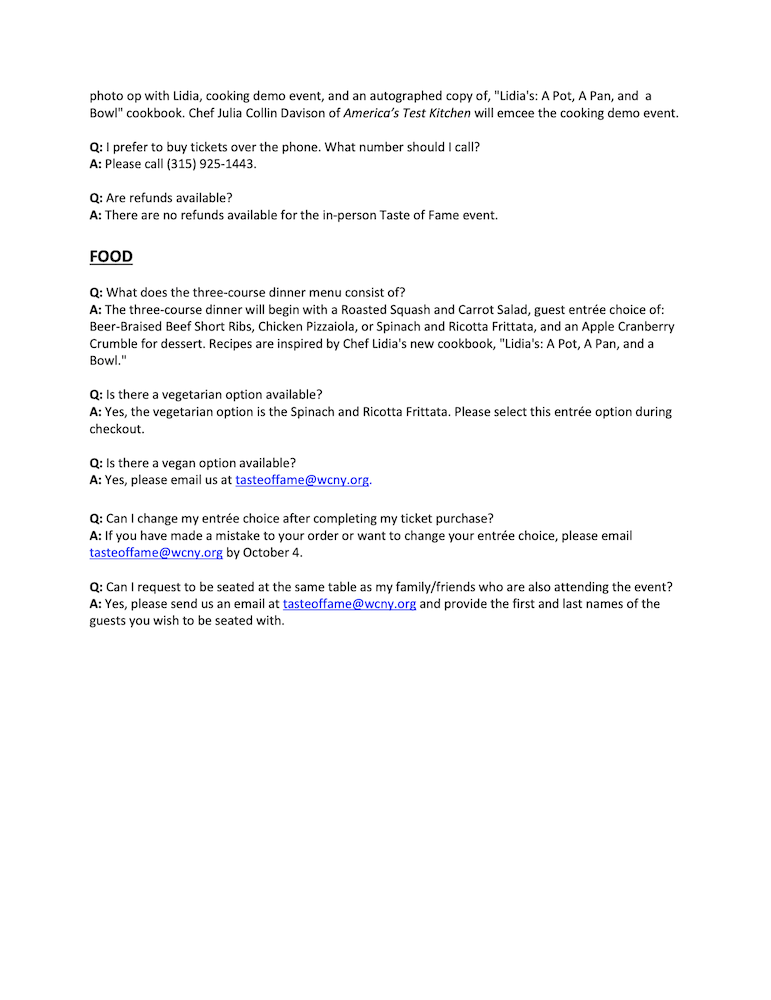 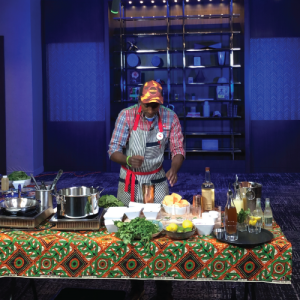 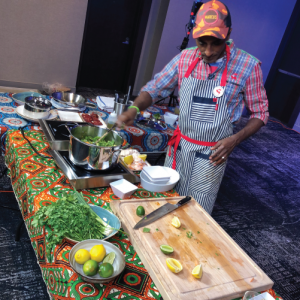 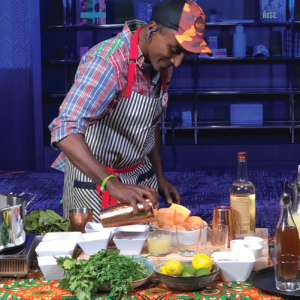 Jeff Scheer, Chairman of the WCNY Board of Trustees and Taste of Fame Co-Chair enjoying the event with his wife, Abby,

and daughters, Sophie, Rachel, and Rose. 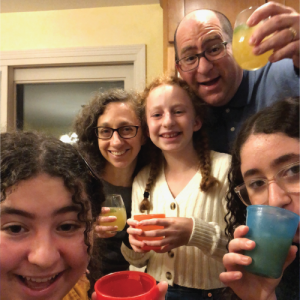 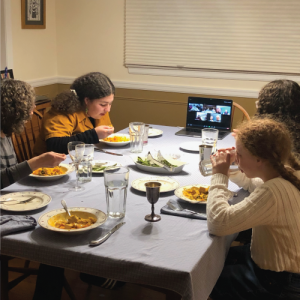 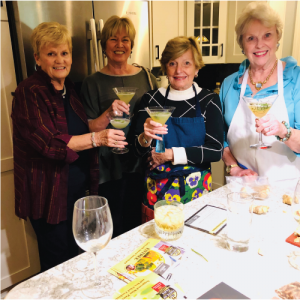 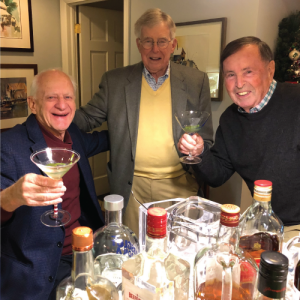 The Schimpff family enjoying the event. 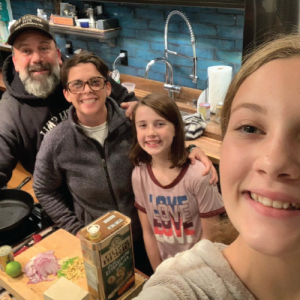 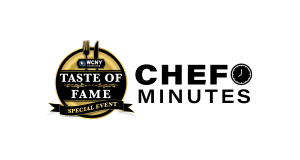 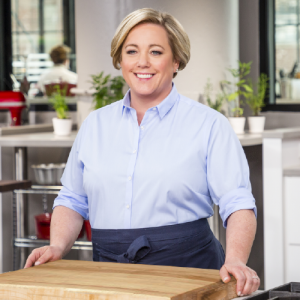 Julia began working as a test cook for Cook’s Illustrated in 1999 and led recipe development for America’s Test Kitchen cookbooks for more than a decade.

Julia is a regular guest on The Dr. Oz Show, Hallmark Channel’s Home & Family, and QVC and has appeared on Fox & Friends and Today. 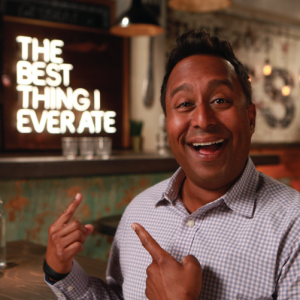 Ali Khan is a television host and food writer/blogger/influencer sharing his love for food across multiple digital platforms. His breakout series, Cheap Eats ran for 5 seasons on Cooking Channel. He is a regular on The Best Thing I Ever Ate, a judge on Food Network’s Chopped +Chopped Junior and served as host of the fourth season of Spring Baking Championship, also on Food Network.

His food writing has appeared in Black Book Magazine, Urban Daddy, James Beard winner LA TACO, You Gotta Eat This as well as authoring his own food blog, Bang for your Burger Buck. His vlog series, “blackbookali” was part of Tastemade’s initial content launch.

Being the child of South Asian immigrants, Ali learned early on that exotic food to some is comfort food to others. He credits his upbringing in the middle of America with parents from literally the other side of the world with his intimate understanding of food and food cultures.

In addition to food writing, Ali is a natural born performer trained in the Theatrical Arts at Carnegie Mellon University and the University of Southern California where he earned his B.A. in Theater Studies. His passion for performance and all things epicurean eventually led him to Food Network, where his earliest appearances include Grill It with Bobby Flay and the Best Thing I Ever Made. Producer credits include Food Network’s $24 in 24, Thanksgiving Live and he helped develop projects for Jeff Mauro, Alton Brown and Simon Majumdar.

In 2015, Ali premiered his very own show, Cheap Eats, on Cooking Channel . Armed with a budget of only $35, Ali takes a culinary tour of the US on a budget almost anyone can afford. Cheap Eats aired for 5 seasons spanning 40 states and 59 cities in as many episodes.

In 2018, Ali joined Food Network’s Spring Baking Championship as the host for the 4th season. Ali has made numerous appearances on Food Network’s Chopped and Chopped Junior, Best Thing I Ever Ate.

In 2020, Ali launched Good Sauce, a YouTube Channel dedicated to his two loves: food and comedy. The first series, Ali vs The Dome releases new episodes every Thursday.

He currently resides in Austin TX. 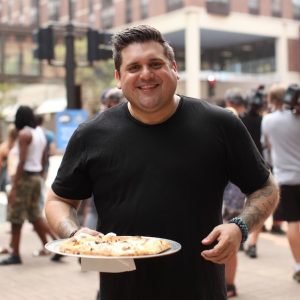 Brad’s love of cooking was instilled in him from a young age. Growing up in a suburb of Chicago, Brad spent much of his childhood cooking alongside his grandmother and lending a hand in his father’s butcher shop. Deciding to transform this passion into his career, Miller enrolled in Scottsdale Culinary Institute’s Cordon Bleu program. Upon graduating, he worked for Arizona’s 5-Star Latilla at the Boulders and 4-Star Wright’s at the Arizona Biltmore, before heading to Los Angeles’ Michelin-starred Patina. From there, he went on to become Executive Chef of LA’s most romantic restaurant, Inn of the Seventh Ray. There, he received praise from many outlets, including The Los Angeles Times’ top food critic S. Irene Virbila.

Brad is currently the Chef and Co-Owner at Inn of the Seventh Ray restaurant, corporate chef and tastemaker for Five Star Senior Living, one of the country’s most prestigious retirement companies. He is also the owner of Brown Butter Productions, a catering and content production company.

Brad is a much sought-after television personality, appearing on channels such as VH1, NBC, FOX, Food Network, Cooking Channel, PBS, AWE, VICE, Travel Channel, Tasted Channel and The Hallmark Channel. Catch Brad on his very own show “Food Truck Nation” which is currently airing its second season on The Cooking Channel. You can also find Brad on “Best Thing I Ever Ate,” currently airing on Food Network. 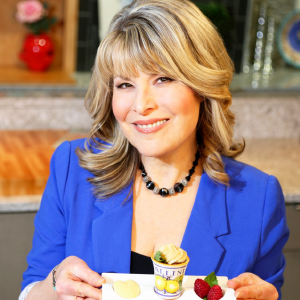 Laura is author of five cookbooks, including Jazzy Vegetarian’s Deliciously Vegan, which won silver medals at the 2018 IBPA Benjamin Franklin Awards, Midwest Book Awards and the 2019 Living Now Book Awards. Her new cookbook, Vegan for Everyone; 160 Family Friendly Recipes with a Delicious Modern Twist was recently released by Scribe Publishing Company. Laura and Jazzy Vegetarian are recipients of the Taste Award for Best Health and Fitness Television Program (Food and Diet), and Jazzy Vegetarian was inducted into the Taste Hall of Fame.

Laura has been on the cover of three prestigious magazines; American Vegan, Jazzin’, and La Fashionista Compassionista. She has made guest appearances on The Talk on CBS, Insider/Entertainment Tonight and the WCBS News Radio Health & Wellbeing Report. Laura has been featured in the New York Times, New York Daily News, Mother Earth Living, VegNews, Family Circle, Readers Digest and PBS Food, among other highly respected news, food, music and lifestyle-related journals.

As a globally recognized award-winning jazz singer and songwriter, Laura has recorded six solo CDs, including her award-winning disc, “Tonight’s the Night,” which received a Musician Magazine Award. Her CD release with the late, great Joe Beck entitled “Golden Earrings,” (on the Whaling City Sound label) was on the GRAMMY® list in the category of “Best Jazz Vocal Album.” Laura has toured throughout the country, performing at numerous major events, such as Night of 100 Stars, Fire and Ice Ball, and The American Film Awards.

On the acting side of things, Laura has appeared in over sixty plays and musicals including Off-Broadway for two years in the hit show “Beehive,” which earned her a coveted Backstage Bistro Award. She was honored with the Denver Critics Drama Circle Award as “Best Actress in a Musical,” for her starring role as Janis Joplin in the world premier production of “Love, Janis.”

With her love for good food, compassion for animals and enthusiasm for great music, multi-talented personality, Laura Theodore truly is the Jazzy Vegetarian. Learn more about Laura and Jazzy Vegetarian at: www.jazzyvegetarian.com 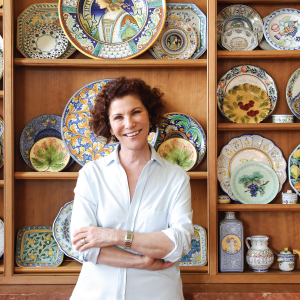 Joanne is a James Beard award-winning cookbook author and has written 17 cookbooks, including her most recent food memoir, Kitchen Gypsy: Stories and Recipes from a Lifetime Romance with Food, published in September 2015.  Joanne writes for several national publications, including Sunset Magazine, Cooking Light, Better Homes and Gardens, Fine Cooking, and Food & Wine.

Joanne is also the host and Executive Producer for several award-winning television series.   Her latest show, “Joanne Weir’s Plates & Places,” earned nominations for several Taste Awards and was chosen as the “Best New Series” in 2018.  Filmed on location around the globe, each episode provides viewers with a virtual trip to several of Joanne’s culinary destinations.  The series is currently in its third season and airs nationwide on both Public Television and Create in over 94% of US households. 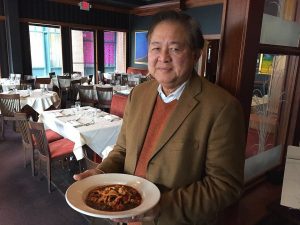 Methin “Max” Chuthinthranond and his wife Pook are the founders, owners, and operators of the award-winning Lemon Grass & Bistro Elephant Steakhouse located in Armory Square, Syracuse for more than 20 years. They also operate the sister location, Citronelle, a New-American and Mediterranean-inspired restaurant, bar, and event space.

Thank You for Attending Our Taste of Fame Virtual Event with Chef Lidia Bastianich! 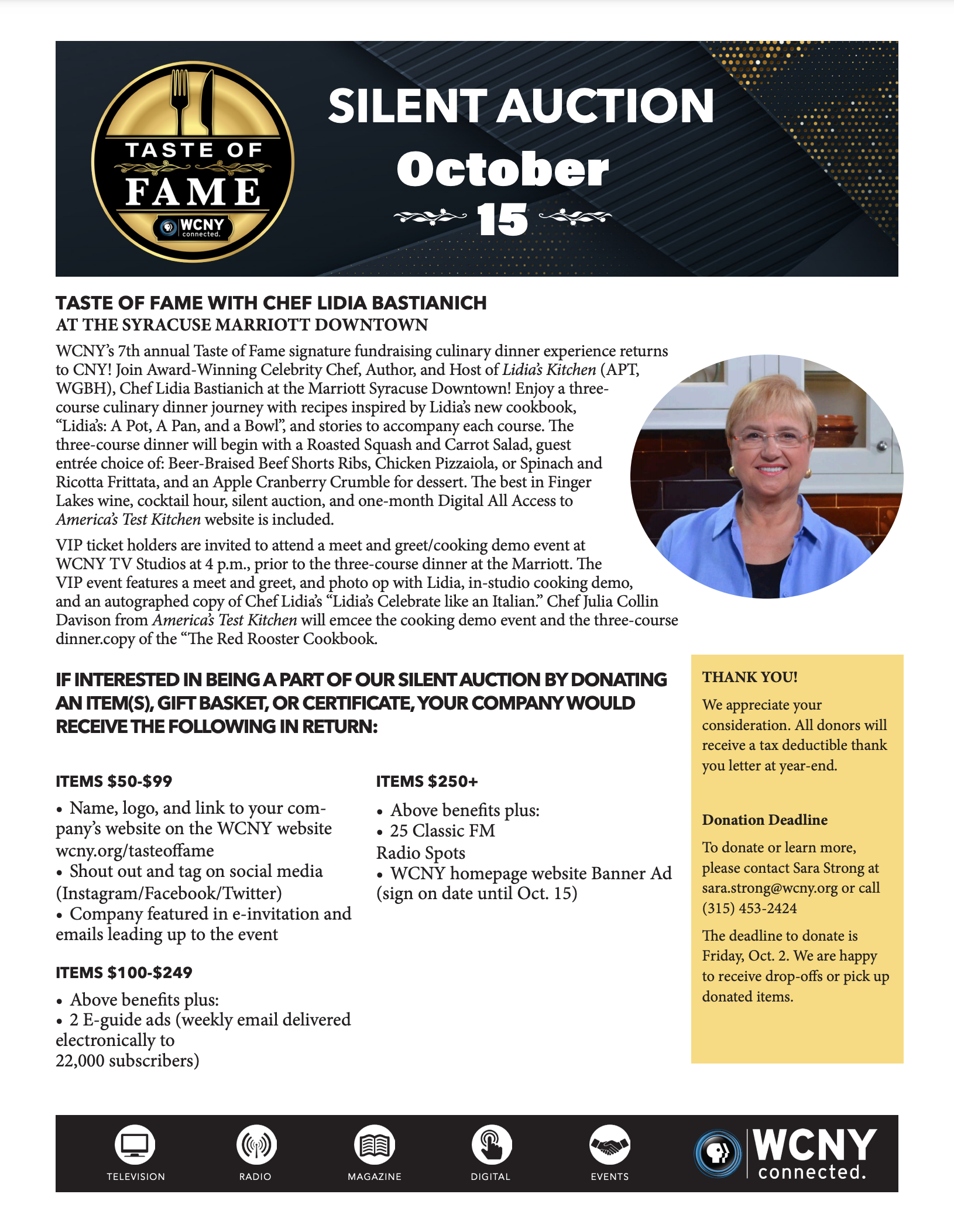