Classic FM is available on 91.3 in Syracuse, 89.5 in Utica/Rome and 90.9 in Watertown, the North Country and the Kingston area and in streaming audio. Click here to visit the Classic FM page, which includes the Classic FM playlist.

You can find the Classic FM Top 40 Listener Favorites here.

Listen to cool jazz 24 hours a day on WCNY’s Jazz HD3 radio. The station features Sounds of Jazz with WCNY-FM’s own Leo Rayhill and programs from the Jazz Satellite Network. Other programs include Marian McPartland’s Piano Jazz, Song Travels with Michael Feinstein, Jazz Inspired with Judy Carmichael, and more.

Jazz HD3 radio is available on an HD radio and in streaming audio.

WCNY Oldies FM HD2 features the best in rock and pop oldies 24 hours a day, with NPR news each hour. Enjoy your favorite oldies from the 1950s and 1960s, along with selected music from the 70s and 80s. Artists include Elvis Presley, the Beatles, Perry Como, Joni Mitchell, the Supremes, Dean Martin and many more!

Oldies FM HD2 is available on an HD radio and in streaming audio. 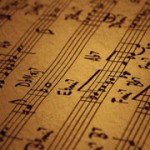 Listen to The Bluegrass Ramble every Sunday night with Bill Knowlton from 9 p.m. to midnight on WCNY-FM 91.3 Syracuse, WUNY-FM 89.5 Utica, and WJNY-FM 90.9 Watertown.

“Fresk Ink” has combined new musical styles into an hour of innovative programming since May 1996 on WCNY Classic FM. Produced and hosted by Neva Pilgrim of the Society for New Music, Fresh Ink features music from the past 5-10 years by composers, performers and recording companies from around the world, including world premieres. It airs Sundays from 4 – 5 p.m

The Capitol Pressroom is a daily one-hour radio program broadcast from the Legislative Correspondents Association Pressroom on the third floor of the State Capitol in Albany. Learn more

Each week, Leo Rayhill highlights such greats as Louis Armstrong, Count Basie, Ella Fitzgerald and Duke Ellington. Rayhill, a 45-year veteran of the radio industry and host of WCNY’s Sounds of Jazz for more than 40 years, can be heard on WCNY-FM 91.3 Syracuse, WUNY-FM 89.5 Utica, and WJNY-FM 90.9 Watertown Sunday afternoons at 1 p.m. With a digital radio, you can tune toWCNY’s Jazz broadcast on each of the signals noted above (or online below) and listen to Sounds of Jazz seven days a week from 2 p.m. until 6 p.m. 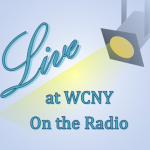 Live at WCNY – On the Radio

Keep in touch with upcoming musical events as local, regional, national, and international musicians and artists visit the Classic FM studios.  Interviews and live performances inform and entertain you!  Follow WCNY on Facebook and Twitter to learn of upcoming Live at WCNY Radio Events, with host Diane Jones. Learn more 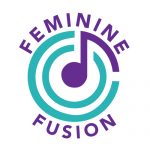 “Feminine Fusion” is a new, weekly radio program that highlights the influence of women in classical music. These are the women throughout history and into the present day who create, perform, and inspire. Learn more. 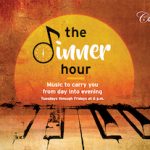 Your Classic FM hosts bring you “The Dinner Hour,” Tuesdays through Fridays at 6 p.m. Enjoy this hour of music to carry you from day into evening! 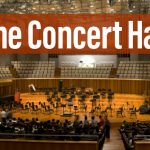 Bruce Paulsen is your host every Saturday night at 8 p.m. for “The Concert Hall.” Relive the best concerts from around the region, with local and internationally acclaimed artists – right in your own home.

WCNY’s radio hosts are familiar to anyone who’s listened to Classic FM or any of our local programs, such as Ciao! and Bill Knowlton’s Bluegrass Ramble. Learn more about the men and women behind the microphones here at WCNY-FM.

Bruce Paulsen
Bruce Paulsen hosts your morning drive time Classic Choices program weekdays from 6 to 10 a.m.  With degrees in music and theatre, Bruce has performed with many of the great musicians of our time. He brings more than thirty years’ performance experience to the microphone. WCNY is his second expedition into radio. Before this, he hosted opera programs and weekends for WGKA, Atlanta’s Voice of the Arts.

Diane Jones
Diane Jones is the Program Manager, mid-day host, and host/producer of the nationally syndicated program, Feminine Fusion. An active composer, she has received commissions from nationally and internationally-recognized musicians and ensembles. Diane performs regularly with Samba Laranja and the Central New York Flute Choir, and her music is featured on more than half a dozen CDs, including three SAMMY award winners. Follow Diane on Twitter (@ComposerJones) and Facebook (Diane Jones On The Air) for more about her programming and her music.

Marie Lamb
Marie Lamb, Classic FM announcer from 2 to 7 p.m. weekdays and host of Saturday Opera, Part 2 is a Central New York native and a graduate of the Setnor School of Music at Syracuse University. Marie began in radio as the host of classical and opera programs at WIKE-AM, at the former Eisenhower College in Seneca Falls. She also hosted a daily jazz program for many years at WAER-FM in Syracuse. Marie began at Classic FM in 2002 as a board operator. Her duties have expanded over the years to include announcing, production, interviews, and running WCNY’s ReadOut radio reading service, which serves the blind, visually impaired, and people with other conditions that limit their use of print.

Adam Fine
Adam Fine hosts Classic Choices Saturday and Sunday morning, Monday afternoon, and Tuesday mid-day. He hosted the limited series Classically Jewish, exploring Jewish influences in classical music. Adam brings an extensive performance background as an actor, singer, and conductor in both opera and music theater to the microphone. A former music teacher, he has studied music education, composition, and conducting at both Northwestern and Syracuse Universities. Adam performs regularly with Syracuse Opera and has also sung with Oswego Opera Theater and Syracuse Vocal Ensemble.

Chris Cresswell
Chris Cresswell hosts your Wednesday morning Classic Choices every week from 6 to 10am. He once shared the stage with a Pulitzer Prize-winning poet, and again with a top 40 country singer. He is a composer, sound artist, guitarist, and singer/songwriter whose music has been performed around the world. When not working on music, he is an avid runner.

Leo Rayhill
Leo Rayhill has been the host of The Sounds of Jazz (heard Sundays on Classic FM) since 1961 and the program has been broadcast on WCNY-FM since the station signed on in 1971. Rayhill is also the host of Classic Sinatra, which can be heard daily on WCNY’s Jazz HD station. A Central New York native, Leo is a graduate of Hamilton College.

Neva Pilgrim
A graduate of Hamline and Yale, Pilgrim is a professional singer and recording artist. She is also a founding member of the Society for New Music and its educational programs, concerts and operas the organization sponsors. Having concertized throughout the U.S. and abroad with such conductors as Boulez and Keene, Neva has been artist-in-residence at Colgate University for many years. Pilgrim garnered numerous awards, most recently CMM’s Lifetime Achievement for outstanding contribution by a musician to the community.

Bill Knowlton
Dubbed by some as “Mr. Bluegrass of Central New York”, Bill hosted the first all-bluegrass radio show in New York City in 1960. Coming to Syracuse as a US Air Force Public Affairs Officer, Bill started the “Bluegrass Ramble” on WCNY-FM in January 1973. In 1997, Bill was named “Broadcast Personality of the Year” by the International Bluegrass Music Association. He emcees at least 13 bluegrass festivals every year and writes liner notes for bluegrass and old-time country music artists. Bill is a resident of Liverpool.

Joey Nigro
Joey Nigro has been entertaining audiences as a singer most of her life in musicals, clubs, concerts and cabaret performances. Her recordings and original songs have been featured on numerous radio and CD compilations. After graduating from Syracuse University’s S.I. Newhouse School of Communications with a degree in journalism, Joey worked in New York City before returning to Central New York. She was raised on Syracuse’s old North Side Italian American Community where she began interviewing immigrant forbears and second-generation Italian Americans in her family and writing about growing up Italian American. She is a charter trustee of the Landmark Theatre and has worked in workforce development for more than 30 years.

Jim Battaglia
Jim Battaglia was born in the Southern province of Calabria and raised in an Italian American enclave on Syracuse’s Near Westside, where his parents established their home when he was two and a half years old. He is fluent in his first language, the Italian Calebrese dialect, and has toured Italy many times. He and his wife, Francine, have vacationed worldwide and are frequent visitors to his birthplace, the coastal village in Calabria. Jim graduated from CCBI with a degree in business and has been manager of Nojaim’s Market on the Near Westside for more than 40 years. He is Vice President of the Greater Syracuse Sports Hall of Fame. 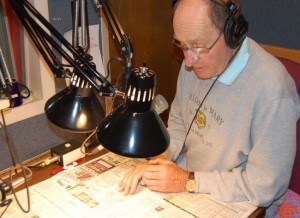 You can hear The Post-Standard each each day along with an assortment of magazines and best sellers. Our affiliation with the Radio Talking Book Network brings the New York Times, The Wall Street Journal, the Christian Science Monitor, the New Yorker, National Geographic and much more publications to the visually impaired who use the ReadOut service. Learn more

WCNY is proud to carry these programs from around the country. Listen to 91.3 WCNY-FM Syracuse, 89.5 WUNY-FM Utica, 90.9 WJNY-FM Watertown, on the web at wcny.org, or through your favorite streaming app. 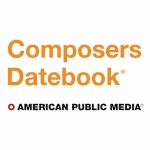 Host John Birge presents a daily snapshot of composers past and present, with timely information, intriguing musical events, and music related to each.

Monday through Sunday at 9am

Repeated at 3pm Monday through Friday

Exploring Music with Bill McGlaughlin is a creative exploration of classical music and other genres. Each week’s programs are unified by compositions that share a central theme – a composer, a period of history, or a musical form.

Monday through Friday at 7pm 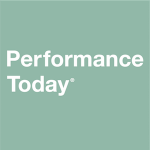 Performance Today features the best live performance recordings from concert halls around the world, as well as in-studio performances and interview with an eclectic mix of guests. Fred Child is your host.

Monday through Friday at 10pm 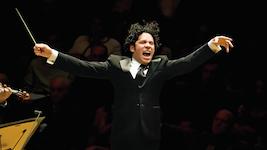 Hailed for outstanding artistry since 1919, the acclaim of the Los Angeles Philharmonic continues under the leadership of Venezuelan Gustavo Dudamel, one of the most exciting young conductors today. Dudamel’s infectious emotional energy wins over the most jaded souls. Each year, the LA Phil presents these national broadcasts hosted by Brian Lauritzen, giving fresh perspective on orchestral performance today.

Symphoria, Central New York’s only musician-led orchestra, brings you performances from the heart of Syracuse. Bruce Paulsen is your host. 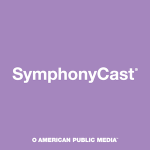 SymphonyCast features full-length concerts recently performed by the best orchestras from around the world, including Europe’s premier symphony orchestras and festivals, along with US orchestras. 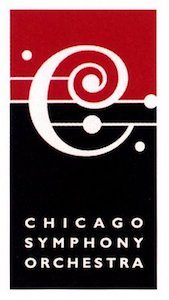 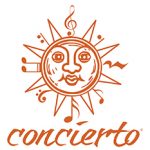 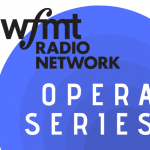 The 2021 WFMT Radio Network Opera Series brings operas from around the country and around the globe. This season includes productions from Chicago, England, Sweden, and France, featuring exceptional casts and stunning performances.

Footlight Parade: Sounds of the American Music gives you the best seat in the house for a celebration of Broadway and Hollywood musicals from the early 20th century to current hits. Bill Rudman has been your host since 1998. 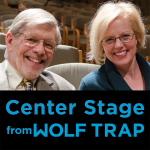 Saturdays at 6 and 7pm 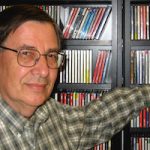 Henry Fogel brings a wide range of recordings every week that are true classics of the industry, on Collectors Corner. Many are out-of-print or hard to locate in the US.

Classical Guitar Alive features great music and fascinating interviews with many of the world’s leading guitar performers and composers. Tony Morris is your host. 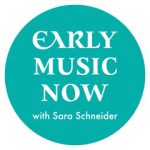 One of eleven constituents of Lincoln Center for the Performing Arts, the Chamber Music Society of Lincoln Center presents an annual series of concerts and educational events for listeners ranging from connoisseurs to chamber music newcomers of all ages.

Played in Oregon shines the spotlight on fantastic live music from around Oregon and the Pacific Northwest. 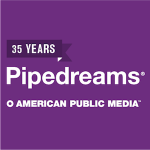 Experience the variety and wonder of the pipe organ with host Michael Barone. Pipedreams has bene a classical music staple on public radio for more than 30 years. 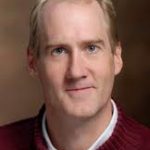 Monday through Friday from midnight to 6am

Saturday and Sunday from midnight through 7am 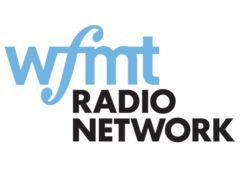 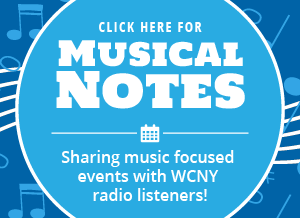