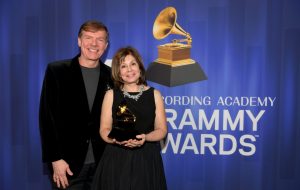 “I’ve been a woman for a little over 50 years and have gotten over my initial astonishment.  As for conducting an orchestra, that’s a job where I don’t think sex plays much part.”  – Nadia Boulanger

The conductor’s podium is still struggling with the preconceived notion that a conductor should be a man.  The women on today’s program are turning that notion on its head.  Here are some marvelous performances from women Leading the Way from the podium.