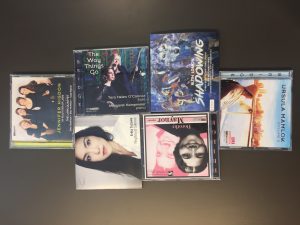 “Much like a patchwork quilt, inspiration that stirs and motivates me is made of many things.”  – Robert Reynolds

Every now and then it’s fun to put together a program of random works.  Over the last couple of weeks I’ve received a number of wonderful CDs, and now is a great opportunity to share some of them with you.  Solos, chamber works, and even a recording from a 1940 concert at the Library of Congress – all part of the next Feminine Fusion.