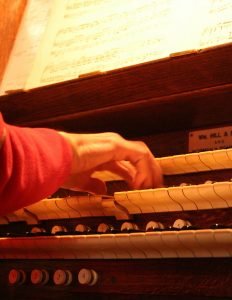 “There is nothing to playing the organ.  You only have to hit the right notes at the right time and the instrument plays itself.”  – Johann Sebastian Bach

The organ is a fascinating instrument.  Each one is different, and brings a unique sound and feeling to a performance.  This week, music for the organ composed and performed by women.