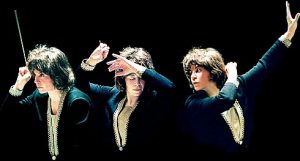 “Ninety percent of what a conductor does comes in the rehearsal – the vision, the structure, the architecture.” – Joshua Bell

In 2015, the Dallas Opera launched a twenty-year initiative to promote female representation on the conductor’s podium.  On this episode, we hear from three women who are already well established and respected in the conducting world.