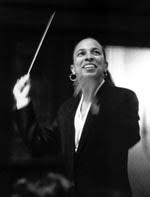 “It’s not the load that breaks you down, it’s the way you carry it.” – Lena Horne

Maestra Xian Zhang says, “conducting is somehow an intimidating job to think about.  It is not only women who don’t go into this.  Not a lot of men think about becoming conductors either.”  On this episode, three women – conductors, artistic directors, educators – who are overcoming both racial and gender bias to succeed in their field.