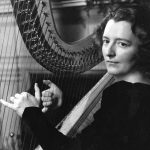 “Women artists need to break barriers in order for women’s experience to be valuable.” – Liz Phair

For centuries, orchestras have been dominated by men.  It was remarkable when Leopold Stokowski appointed Edna Phillips to the position of Principal Harp in 1930.  Just fifty years later, members of the Berlin Philharmonic threatened to strike if a female clarinetist was hired.  Women auditioning on traditionally “male” oriented instruments – think tuba or trombone – were dismissed as not having the physical stamina to play in an orchestra.  And yet, with the advent of blind auditions, the number of women hired by orchestras has increased significantly.  This episode of Feminine Fusion takes a look at just a few of these women joining the ranks of the orchestra, becoming “Part Of The Crowd.”

“Part Of The Crowd”