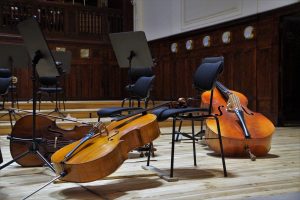 “All I want to do is go out there and share the wonderful world of music. And advocate music education for every single child regardless of background, ethnicity and wealth. Because it’s so good for you to learn an instrument.” – Chi-chi Nwanoku

We’re a little low strung this week on Feminine Fusion, with music from women who play the double bass and the cello.  We have performances from some musicians you may know, and I’ll introduce you to some who may be unfamiliar.

Since 1998, there have been 335 double bass auditions in orchestras around the country.  96% of those positions were won by men.  There is a bias that only a big, strong person could play such a massive instrument.  But double bassists like Chi Chi Nwanoku and Nina DeCesare (like Julius Caesar) contradict that image.  DeCesare plays with the Oregon Symphony, but says that, even those who support her sometimes show an unconscious bias.  A donor once told her that she loved watching her play because she’s “keeping up with the men and their big muscles!”