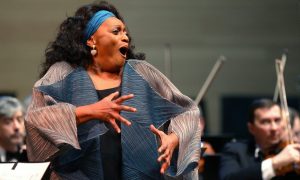 “Pigeonholing is only interesting to pigeons.”  – Jessye Norman

A youngster sees a musician and says, “She looks like me.  And she’s making incredible music.  I can do that, too!”  Being a woman of color is still an anomaly in the Classical music world, and this week we’ll take another listen to some of these talented musicians.  On today’s program we’ll hear performances from women of color who were groundbreakers, as well as those making their way today.