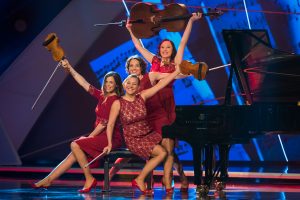 “We don’t have to fight things out.  The more we live with a piece, the more we begin to see it the same way.”  – Sharon Prater, Colorado Quartet

In many ways, a quartet is an ideally-sized ensemble – large enough to cover the wide timbral range of the musical, yet small enough to maintain an intimacy with the audience and an amazing communication among the members.  This week, performances from string quartets and piano quartets.