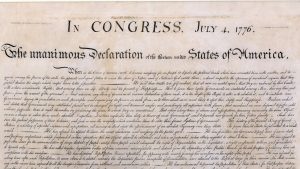 “We, therefore, the Representatives of the united States of America, in General Congress, Assembled, appealing to the Supreme Judge of the world for the rectitude of our intentions, do, in the Name, and by Authority of the good People of these Colonies, solemnly publish and declare, That these United Colonies are, and of Right ought to be Free and Independent States.”
– July 4, 1776

As we mark our American Independence Day, we have music for you from American women highlighting the path we have taken thus far, and shining a light on the path that lies ahead.  We include music from the frontier, to the busy streets of New York city.