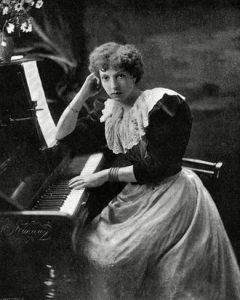 “[She should be known as a composer] pure and simple, rather than by the designation of woman composer.”  – Ambroise Thomas

She was the first woman musician to win the French Legion of Honor award.  Queen Victoria was utterly enamoured of her talent, and President Teddy Roosevelt invited her to play at the White House.  Yet she died alone, her music nearly forgotten.  Today we look at the life and music of Cecile Chaminade.