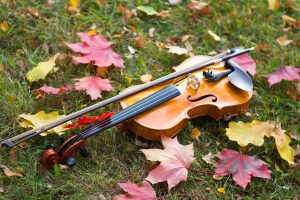 “It was a beautiful bright autumn day, with air like cider and a sky so blue you could drown in it.” – Diana Gabaldon, Outlander

The days are getting shorter, the nights are getting cooler, so it’s a good time to listen to some Autumn music.  Baroque, contemporary, vocal and instrumental works – seasonal music from talented women on this week’s episode.