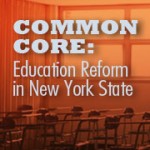 The above stream is a rebroadcast of the Nov. 7 WCNY program.

WCNY hosted the first of four scheduled public forums on new Common Core education standards in New York State at 8 p.m. Thursday, Nov. 7. The forum was televised live before a studio audience at WCNY’s Broadcast and Education Center in Syracuse.

Members of the audience, which included parents, teachers, administrators and school board members, asked King and Bottar questions during the conversation.

The one-hour televised forum was followed by a bonus half hour of discussion on the subject with King and Bottar broadcast live on WCNY’s website.

Common Core standards and the educational reforms that have followed since their implementation in 2012 have divided educators. The standards emphasize critical thinking and so-called deep learning. New York is one of the first in the United States to begin testing on the benchmarks.

When the state education department fielded complaints about poor communication related to Common Core, King scheduled a series of town hall meetings for this school year. When angry parents and professionals disrupted the first event in Poughkeepsie in mid-October, King cancelled the series. In response, some called for his resignation. The state responded by scheduling four televised public forums on Common Core.