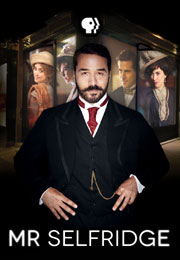 At the unfashionable end of Oxford Street in 1909 London, an American retail tycoon arrives to jettison fusty British tradition and open one of the finest department stores the world has ever seen: Selfridges. Three-time Emmy winner Jeremy Piven (in his first television appearance since his iconic role as Hollywood agent Ari Gold in Entourage) stars as Harry Gordon Selfridge, the flamboyant entrepreneur and showman seeking to provide London’s shoppers with the ultimate merchandise and the ultimate thrill.

Look for Series 2 as part of Masterpiece next spring on WCNY.