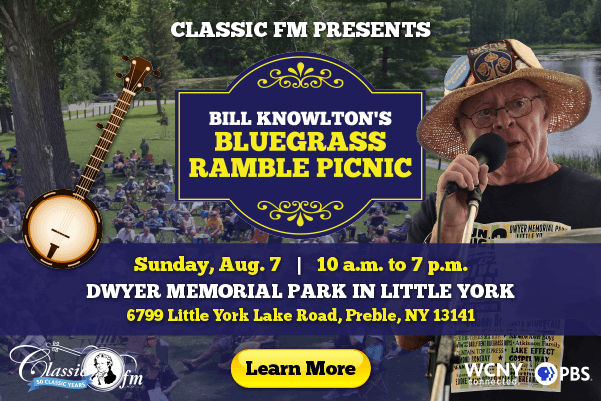 WCNY to Air New Show “On the Money”

In 1992, WCNY-TV tested a new show concept geared towards personal finances and investment advice. After just one season, it became clear the show was a hit with viewers, many of whom called in with their questions during the live Thursday night broadcasts. “Financial Fitness” went on to become one of the station’s longest-running and highest-rated programs.

Now, after a ten-year hiatus, J. Daniel Pluff, former host and creator of “Financial Fitness,” returns to WCNY for a  new “money” show.

“We had a great run with “Financial Fitness,” but 20 years is a long time for television, and the landscape has changed. This show feels different, more in touch with current viewer habits and interests,” Pluff said. “It will spotlight where money is being made, spent, and lost locally.”

The show will seek out unique individuals who will share their success stories along with entrepreneurs making investments locally. Interesting people and newsworthy businesses will appear on various segments of the show, but less obvious activities will also often appear. For example, the film industry, previously all but unknown to our market, has been flourishing. Hollywood has chosen Central New York as a popular spot for filming and hiring locals for extras. The show will introduce viewers to this growing local industry, the people making the movies, and even some well-known actors filming here.

“We are getting the chance to meet some fascinating people often doing some unusual things,” Pluff said, who frequently goes on location to conduct interviews. “It’s amazing to see what people are doing, making a difference in our area,”   Kevin Miller, the show’s producer, coordinates the interviews and locations and adds a professional look to those shoots outside the studio. He and Pluff are constantly searching for money-related stories in our area.

Recent reports indicate a surprising uptick in investments being made in Central New York from large companies like Amazon to smaller, independent businesses. But investments in technology and new businesses, some of which have even gone public, will also be highlighted. Pluff was quick to point out this isn’t an “investment show” per se, but he believes viewers will be inspired by the stories and people each week. “We’re not re-creating “Financial Fitness,” but I think there’s a lot in these stories viewers will appreciate, learn and maybe even profit from.”

For example, featured guests will offer consumer and technology tips along with money savings ideas. Useful phone and computer apps will be offered along with updated news on savings levels, interest rates, real estate, and of course, tax savings. Whenever possible, the show will also warn of local scams, especially internet-based, and offer advice on how best to avoid these traps, which can often be costly. Expect updates from the District Attorney’s office and Attorney General for trends in financial crimes.

“My major concern is we already have so much to squeeze into 30 minutes each week. People are making money while others are losing; businesses are thriving and hiring while others face major roadblocks and hurdles. What factors determine success or failure, and if our local economy is improving, does that make us more financially secure? We’re constantly looking for answers,” Pluff said.

The positive and negative impact of local economic initiatives is essential to follow, and the show will report where and how money is being spent. But these won’t all be “feel good” pieces, Pluff insists. “Government, corporate or even an individual’s spending can be very beneficial in many circumstances, but when it doesn’t work, we’ll want to know why and who was harmed.”

Topics are nearly endless, but most have a money connection. For example, the future of health care in Central New York, especially with ongoing COVD, will be discussed along with the costs of providing and receiving care. Crime, law enforcement, fire and rescue services, and the costs of providing protection will be examined. Segments will feature progress in downtown Syracuse as it emerges from a near-total lockdown, and the Finger Lakes region will be celebrated as it continues to win various travel industry awards and helps to enhance our local economy. Other stories may leave more questions than answers, such as the future of Destiny USA, the proposed aquarium, and the seemingly endless debate surrounding Interstate 81. With literally billions of dollars in play, these topics are becoming more important to us all.

“On The Money” promises a fresh look at the people, stories, and events impacting us financially – some of which will be positive and uplifting, others not so much. So join us for this new series – meet the people, discover the places and see what’s impacting your wallet each week.