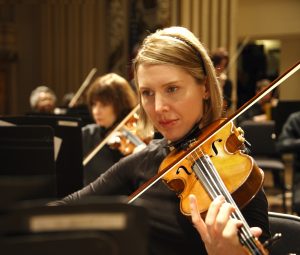 Since the 1960s, professional orchestras have become steadily more gender balanced.  Nowadays, there is almost a 50/50 ratio of women to men behind the music stands.  And the technical agility of the ensembles overall has improved, not so much as a result of the increased presence of women, but rather because musicians are being judged on their performance instead of their gender.