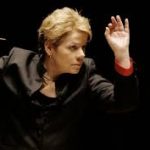 “You’re either born a musician, or you’re born not a musician.  It has nothing to do with gender.” – Antonia Brico

Conducting is still a male-dominated stronghold in the musical world.  Even in the last few years, prominent conductors insist that woman conductors are not capable of conducting anything other than “feminine” works, like Debussy or Ravel.  And that the rigors of conducting are too hard for women, claiming it is “an issue of biology.”  On this episode of Feminine Fusion, three remarkable women take the podium and show just what they are capable of achieving.

(And here’s the Classic FM list of why women can’t be conductors.)