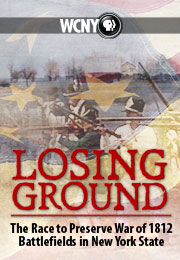 “Losing Ground: The Race to Preserve War of 1812 Battlefields in New York State” will premiere on WCNY in February 2014.

Walking past any patch of land along the shore of Lake Ontario, many would not immediately recognize the rocky coast as bearing witness to some of our nation’s most notorious conflicts. The depth of the Great Lakes and their wind-swept shores hold the memories of a war; waged between a young American republic, growing Canadian territories and a bruised British empire.

Many historians distinguish the War of 1812 as America’s second battle for independence. Trade embargos, sailor impressment and Indian land expansion were among the larger grievances that pitted the newly minted United States against a British Empire still wrapped up in the Napoleonic Wars. And although it is considered a minor engagement, the War of 1812 remains an important turning point in our nation’s history. It was the first war America would wage under its freshly printed constitution. The conflict ignited a fierce spark of patriotism and pride that would help usher the country into a new age of prosperity.

200 years later, celebrations across New York and Canada commemorate the veterans and battlefields of the War of 1812. But with each passing year, there is less and less physical evidence of this significant part of New York history. As the population grows and unchecked development expands, preservationists worry that the lands that played a vital role in U.S. history are disappearing at an alarming rate. Once they are gone, so too are the opportunities of enrichment for generations of future Americans.

This year, WCNY brings together some of the nation’s foremost experts on the War of 1812. They help frame this chapter in our state history and reflect on why is it so important to preserve these sites for future generations. In addition, we walk through the hollowed grounds of these sites with some of the country’s top battlefield archaeologists. Their insights into the invisible secrets hidden just below the surface of the front lines are part of the knowledge that will help safeguard and preserve significant American battlefield lands in New York.

From Oswego to Plattsburgh and Ogdensburg to Sackets Harbor, WCNY interweave the dramatic stories of America’s second Revolutionary War with the modern-day experts who are working to keep history alive. 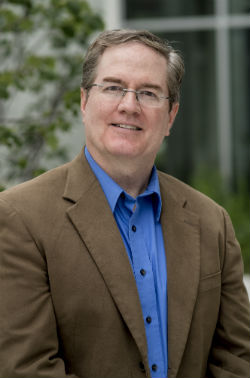 Timothy Davis-Reed is a veteran of more than 150 episodes of series television, including two seasons as a series regular on Sports Night and six seasons as White House press reporter Mark O’Donnell on the Emmy-winning hit “The West Wing”. He has appeared in more than 25 productions of Shakespeare, including major roles for the Theatre at Monmouth in Maine, Riverside Shakespeare, Manhattan Stage and the New York Shakespeare Festival in Central Park.

Regional theater appearances include Princeton Repertory Company, Playwright’s Theatre of New Jersey, the Alliance Theatre in Atlanta and several productions for Syracuse Stage. Currently, he is a Professor of Practice at Syracuse University, where he teaches Scene Study, Audition Technique, and On-Camera Acting.

Amy Manley is an Emmy Award winning TV producer/director with extensive experience in the broadcast markets of upstate New York.

Manley is a producer for WCNY-TV, where she produces local, regional and national programming. After a successful premiere across New York, her award-winning documentary “Arctic Air: A Greenlandic Journey with the 109th”, was seen on PBS stations nationwide throughout 2011. In 2012, Manley was honored with a New York State Broadcasters Award for her production, “Groundswell: Hydrofracking in New York State”.